How it all started

Clonmel Applefest aims to celebrate the unique ‘sense of place’ emanating from Clonmel’s special location as a  centre of industry, agriculture and heritage. By celebrating what is most genuine and authentic about Tipperary’s culture and heritage, we want to develop a network of champions and a community of supporters from a wide range of backgrounds to create a truly original and special festival that reflects the multi-layered histories and new stories of the county, and Clonmel in particular. 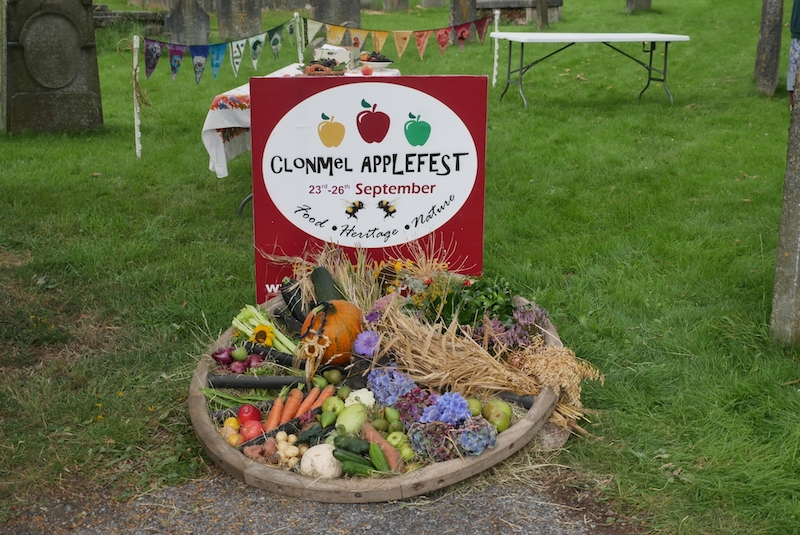 Clonmel Applefest started in 2017 with the ‘Apple Treasures‘ research project created by artists Theresia Guschlbauer and Lyn Mather, also known as the collaborative collective 2CanDo Arts. The project was an investigation of the history of apple growing and cider making involving Clonmel people and stakeholders. It explored how apples affected and influenced the town and its people, and how Clonmel’s  unique ecosystem and creative energy could be reactivated by artistic means to benefit in a  meaningful way Clonmel and its people today.

In collaboration with film-maker Eimear King and performer/writer Louise Garcia, the collective researched the apple growing traditions of Clonmel and over the summer of 2017, interviewed numerous local people –  ex-Bulmers employees, apple orchard owners, storytellers, apple farmers. They gathered stories and memories which were presented as part of the ‘Apple Treasures’ exhibition at the South Tipperary Arts Centre which included a Tree Trail for Culture Night.

SuirCan Community Forum, from the outset, endorsed this project for its envisioned contribution and value to developing Clonmel’s public amenity realm. The humble apple and its relationship to the bee could do much to raise the awareness and status of Clonmel and its environs as a unique destination. This vision of focusing on apples and bees could in due course benefit the region’s existing biodiversity, food and hospitality profile, even building the region’s international reputation.

What 2CanDoArts brought to this project was to place arts and creativity at Applefest’s centre, to develop new ideas involving both creative practitioners and the key stakeholders identified throughout this project to work together collaboratively.

2CanDoArts explored, mapped and displayed the vernacular culture associated with apple crushing and pressing; the gestures and smells; the sights and sounds; the activity that took place in the vicinity of the Friary, where Bulmers used to manufacture their cider. Contributions of filmed footage, photos and stories from stakeholders and interest groups were collated.

The ‘Apple Treasures’ project was designed to be accessible, to allow young and old to contribute. The exhibition was interactive and child-friendly, and included school visits and apple-themed workshops. The ‘Tree Trail’ was in-situ on the most public pedestrian areas of Clonmel on Culture Night, throughout the weekend and the following week. Each tree was decorated to represent a different apple theme which appealed to young and old.

All 18 trees were eventually planted with various community groups: a  set of 7 apple trees was planted as part of the Positive Mental Health festival. Another set of 6 was planted in conjunction with the Presentation Transition Year and 5th Class Primary students. A further 12 trees were planted at the Galloping Fields in collaboration with the Tidy Towns committee in early 2018. Since then , more 200 more apple trees have been planted along the Suir River Blueway with 8 clusters.

“Even if I knew that tomorrow the world would go to pieces, I would still plant my apple tree” – Martin Luther King Jr.

Since 2017, we have planted in excess of 200 apple trees to form a linear orchard along the river Suir. The original trees were sponsored by local businesses and Clonmel Tidy Towns. In 2018, we opened the scheme to the general public and since then, we have planted over 200 trees in eight locations along the river, recreating the historic orchards of Clonmel via individual and family sponsorship, bringing joy and solace to many.

After 5 years of steady planting, we have decided to press ‘pause’ on our beloved Orchard Tree scheme: 200 trees apple trees later, with a mix of cookers, eaters and crabs, it has been wonderful to witness the delight and gratitude of so many people over the years and to receive such warm positive feedback. We will now take the time out to watch the trees bud, bloom and grow and enjoy the pleasure they give to all those walking along the Blueway from the Convent Bridge, via Greenane, Denis Burke Park to the Galloping Fields below Dunnes Stores.

Whether you were celebrating a special event, a beloved person far away or remembering a loved one, planting a tree is always a special way to make a dedication whilst contributing to Clonmel’s public realm and improving the habitat of bees, insects and birds. Each tree has a durable plaque with name dedication with the apple variety inscribed upon it. You can view the location of the trees on the  Clonmel Tidy Town website.

While we no longer run the tree scheme, we will continue to care and maintain the trees by visiting all of the sites twice a year, checking tree ties and stakes and mulching around the trees as needed; we welcome any donations toward the upkeep of the trees. For inquiries drop us an email at clonmelapplefest@gmail.com and we will get back to you promptly.

“Truly delighted to discover our tree in Clonmel. I can’t wait to come visit it again. Very special and thank you.” – Patsy Prior, tree sponsor.

“As a frequent user of the Blueway, I’d like to commend the Applefest team for taking the initiative on this project, it’s a wonderful addition to the town” – Marian Thomas, tree sponsor